I had a couple of attempts recently at making clotted cream. Not something readily available here in Australia. Have read of others giving it a go a go and so thought I would have a go too.

I read a few recipes online. For example, this entry on the Cupcake Project blog and this one on the Joe Pastry blog.

The basic idea seems to be that you cook normal cream at a low temperature for a long time, the liquid evaporates and you have a much thicker, richer cream.

I tried it one weekend with a ‘normal‘ 700ml bottle of thickened cream from the supermarket. I cooked it overnight for 12 hours on about 80 degrees.

It seemed to work quite well – with a really thick, caramelised layer on the top. We tried it immediately on some fresh scones and it was yum. Not exactly like clotted cream that you get in England, but good. 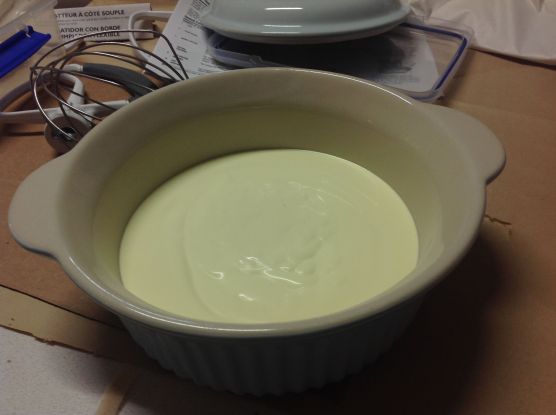 A whole bottle of thickened cream from the supermarket

The top of the cream has caramelised 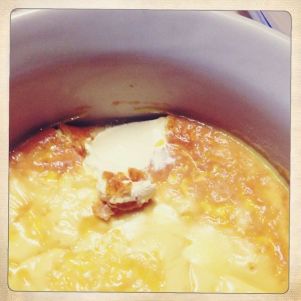 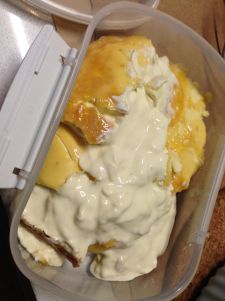 The clotted cream goes on before the jam. Yum!

A week later, I had some people coming for afternoon tea and I thought I’d impress them with some fresh clotted cream. I bought a container of the posh cream that is really thick and is much more expensive than thickened cream (and it has a much higher fat content). I thought that this would make for a really clotted batch of clotted cream. I baked it for 12 hours as I’d done before. This was a complete disaster! It became thinner, although did separate into layers, and I couldn’t use it. I ended up using it in a cake recipe so that I didn’t waste it. Weird!

DearHolly is an ongoing community art project where people anonymously mail in advice on one side of a postcard to a girl named Holly who is about to turn 13.

Shots of science, full of flavour. With Dr Jen from Triple R.

The intrepid travels of a couple of idiots

The latest news on WordPress.com and the WordPress community.